Wind power has much to offer on emissions reduction but less on firm capacity. A A Bettinson, R A Broughton and W E Hatfield argue that the new “demand stack” will need more flexible gas.

In 2013, the UK’s wind energy (metered data only) delivered to the grid was 18.6TWh, or 5.9% of the total electricity demand.  In 2020, there will be much more: annual energy use in 2020 is based on legally binding targets that require 30% of UK electricity to come from renewable sources.  Within that renewables target, projections for wind capacity vary, but it could reach more than three times the 2013 level.
However, annual statistics hide the stark reality that the wind does not blow all the time. So we used two quite different parameters for predicting future generation needs in 2020: total energy to be supplied over the year (TWh) and peak capacity (GW).
The diagrams on p 33 compare the daily energy delivered by various types of generation with its nameplate capacity.  The vertical stack is the energy delivered on the day.  Days of high wind generation (top) can be compared to days when the wind was not blowing (bottom).
The simple story used to be: stack mid-merit plant on top of base-loading plant and fill the top with pumped storage and peaking units.  Where should wind be placed on the curve?
Before 2020 unabated coal plant contributes to the electricity mix; afterwards, the Large Combustion Plant Directive forces unabated plants to close.  Several nuclear plant also come to the end of their economic life, although their lives may be extended.  Simple analysis shows that, in a pre-LCPD world, the conventional capacity will be displaced by increased generation from wind.  What gets displaced, and when, will be determined by the market, government and grid forces.  However, a gap may open up post-LCPD.
So how large is the capacity gap?
The MW available from wind turbines do contribute to the national electricity energy demand and, apart from some very real grid transmission constraints, these MW can usually be consumed by displacing thermal generation.  In 2014, in the period 6-11 January, strong winds allowed around 6,000 MW of wind power to contribute to a near peak demand over several days.
One perspective is that wind generation is a rather effective form of RCCS – rotating carbon capture and storage.  Every kWh of wind energy delivered to the grid allows 450g of coal to remain unburnt, unmined and its carbon stored deep underground.
From a capacity perspective, however, there are clearly days on which the contribution of the nation’s wind assets approaches zero.
A reasonable winter example is 20 January 2014, when the total metered wind power, from 9GW of nameplate capacity, fell to 280MW for several hours.  The national demand on this day was near to the yearly peak, rising above 52GW.  Output from coal and nuclear was quite steady, with gas CCGT ramping up when the wind was low.  The contrast with the following day, 21 January 2014, is marked, with good wind output during most of the day, reaching nearly 5GW. 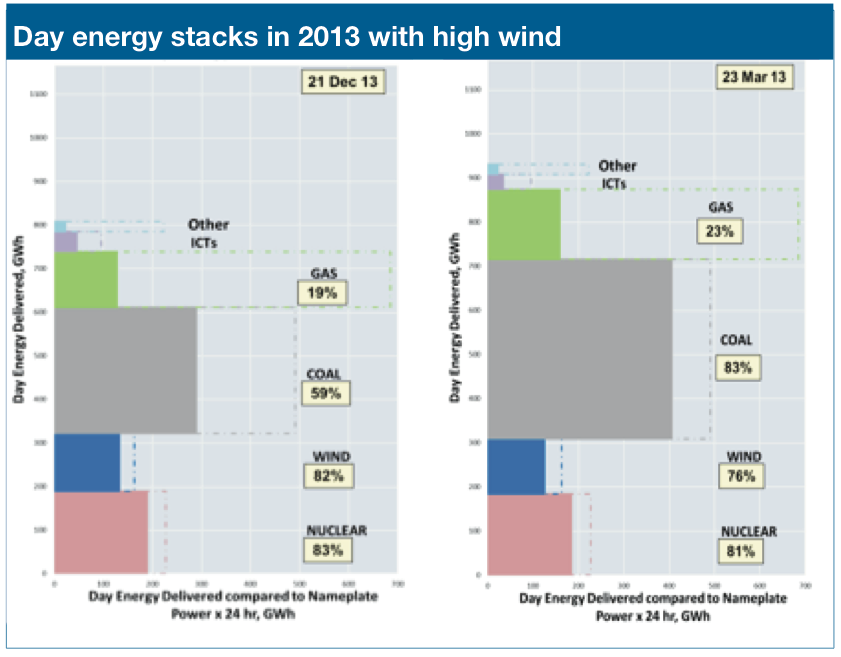 Doubling wind turbine capacity by 2020 will amplify the wind output curve, reducing the energy contribution of gas and coal.  But, unfortunately, adding more wind turbines does not create more wind.  The product of zero and any number is still zero.

The conclusion is that the capacity gap resulting from the retirement of ageing coal and gas assets cannot be filled by installing wind turbines, even if these are perfectly valid for reducing the use of fossil fuels and therefore carbon dioxide.
The capacity gap that the future holds is not related to the intermittency of wind or other renewables, since peak demand must always be served when their contribution is absent.  The gap must therefore be filled by predictable electricity sources.
The amount of additional capacity required from year to year is driven by the closure of ageing plant: coal, to improve emissions under LCPD and IED regimes; nuclear, due to age; and CCGT due to obsolescence or poor market conditions.
Over recent years, European gas prices have been significantly higher than coal and, as the energy from wind has eroded the market hours of lower carbon-emitting gas plant, this has left cheaper coal plant to continue with twice the CO2 emissions per kWh of electricity.  Regrettably, society’s cry for lower electricity prices comes at the cost of carbon emission reductions.
If our common goal is decarbonisation by 2030, then replacing coal plants with the highest efficiency combined cycle gas turbine plant is a reasonable intermediate step.
In theory, the shorter daily peaks of demand may be fulfilled by fast-starting OCGTs, where fewer running hours mean that the efficiency is less important.  However, with the present gas CCGT fleet and almost no OCGT in the UK, lower efficiency CCGT plants are used because they are already built.  As these older CCGT plants are taken out of service, there should be an opportunity for lower cost investment in OCGT to fill these shorter peaks when wind is absent.

← The demand side has real potential – but more work is needed to realise the resource
Will Energy Efficiency be achieved by obligation? →