EDF Energy and SSE have both come out on top in Citizens Advice’s latest energy supplier league table, which measures how effectively customer complaints are dealt with by the 19 largest energy firms in Great Britain.

EDF Energy clinching the top spot for October to December 2015 by just 0.4 points, pushing out SSE who had been number one since the table was first published in its current format nearly five years ago.

Overall, the average complaints ratio for all companies is down with 275.2 registered per 100,000 customers, compared with 339 in the previous quarter. 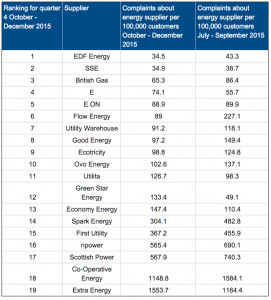 Both have a ratio of less than 50 complaints per 100,000 customers, compared to a ratio of more than 1,000 complaints per 100,000 customers for the worst performing companies, Extra Energy and Co-Operative Energy. Both Co-Operative and Extra have struggled with complaints since introducing a new billing system in 2015. However, while Co-Operative Energy has made progress after recording the worst ever performance last quarter, with complaints falling from 1584.1 per 100,000 customers to 1148.8, Extra Energy has gone in the opposite direction, with complaints rising from 1164.4 to 1553.7 over the same period. Gillian Guy, chief executive of Citizens Advice, said: “The fallout from introducing new billing systems continues to trip up a number of suppliers.T his latest league table tells two different stories – some suppliers have again proven they’re effective at dealing with customer complaints while others lag far behind. Consumers already pay over the odds for their energy bills and it’s unacceptable that some are still being let down by poor customer service.

“On the face of it, it is good the overall number of complaints are steadily decreasing. For those suppliers who still have a long way to go, there is an opportunity to learn from the feedback they are getting from their customers.  Complaints not only give suppliers the chance to put problems right, they also provide valuable insight which can be used to improve services.”

Expert coverage from New Power: Feature: Do energy companies have a future?