Aggregation and demand response company Grid Beyond has been granted a generation licence in the GB market. Last August, chief executive Michael Phelan talked to Janet Wood about the company and the importance of load in the electricity system.

Under its previous name Endeco, Grid Beyond has been using demand-side activities like refrigeration to help balance the system in Ireland for many years. It started working in the GB market about five years ago.

When chief executive Michael Phelan talks about joining the market, he says load was not seen as an important tool. National Grid “were very much of the opinion that they had enough generation and there was more planned [gas and diesel engines]”. He says that was: “They didn’t see it as the most valuable piece… they had to be able to balance frequency on the grid in a new way and the best way of doing that is to use load because it is much faster response than generators.”
At first the load options were being used with other options for static response. But Phelan says now “we have started offering dynamic response”. 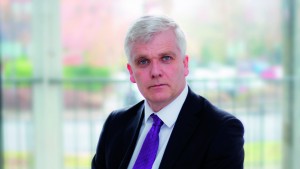 Batteries have been seen as a major option for response, but as technical requirements evolve and opportunity grows, Phelan says the industry has to think about more cost-effective options. “A battery on its own is a very expensive way of doing it. Our concept was to do that in a blended version of batteries, loads and even generation, so we could get different things doing different parts of that process.” That is made possible by the company’s own software. It works out cheaper for the system, he says, because “the load doesn’t have the same cost [as batteries]”.
That also means the industrial and commercial companies that offer to vary load should make a return.
Phelan says using load-based response is necessary because we are moving away from old thermal plants that are retiring.

Use the flexibility that is already in industry

“You can either go very expensively after batteries alone and charge the whole industry for that,” he says, “or you can use the flexibility that is already in industry.” He believes there is several gigawatts of response to be tapped.
Looking at National Grid’s current response products, Phelan thinks the system operator has enough “static” response in case a large generator comes off the system unexpectedly. But a much bigger problem is continuous Fine-tuning. “When you put renewables on the grid you lose your inertia and your ability to operate at 50Hz. Dynamic response is serving that purpose and it is very different.” I ask whether varying the demand side can provide the inertia that helps reduce the need for fine-tuning, and for which we currently rely on large fossil plant. He says in time it could replace them. “There is a huge amount of inertia there. You can manipulate load to do exactly the same finer adjustments that a power plant can do, but the inertia effect is the same and so is the frequency maintenance effect.”
He adds: “That type of service could be provided by load and some embedded generation and batteries and… you won’t need the fossil plants idling.” That way, “you can reduce the cost of energy for everyone”.

“The whole utility system is set up around generation”
I ask whether people forget the opportunities available from the demand side. Phelan says yes. He is frustrated because “the whole utility system is set up around generation”. That has partly dictated the long-standing market design, in which participants buy rigid blocks of power for a time period. They can’t take a flexible bid that would vary within half-hour buying periods to match varying system demand, says Phelan. “It’s huge wastage and it’s to do with the fact that they just can’t take it in their systems. That’s not getting at National Grid, it’s the same everywhere across the parts of the world we have looked at.”
Alongside frequency response, moves to allow aggregated load to participate in the balancing and capacity markets should mean revenue streams can be stacked. A modification has been put forward that would allow aggregators to operate in the balancing market but Phelan says that, once again, “it’s only for generators”, whereas a combination of embedded generation, load and batteries would probably be the most efficient. But he notes that load may be more complicated and need more granularity. “A 20MW load might be using 18MW for its own purposes and have 2MW available for balancing.”
Other investors have pleaded with the system operator to allow long-term contracts for new grid services to provide investment certainty. I ask if that is necessary if you are using load to balance instead, with less upfront investment. Phelan says there is a balance to be struck: “If you give a bit more certainty it would probably pull in more of the investor community. The danger with a long-term contract is that you will get a lot of stuff built which is more expensive. There is definitely something in-between.”
For him a more immediate issue is the testing regime required to get new providers into the market. He says the regime required to qualify a motor was not so dissimilar to that for a full power plant. But he believes that will be streamlined once the market is more mature and there are standard assets – at least for pieces of kit. The control system is a different matter. “They have to figure out whether the control system of the provider works – and does the asset do what they are saying it will do? So they could probably qualify an asset from one supplier, but the control system they probably have to qualify with each aggregator because they are not all the same.”

Storage is not generation at all. It behaves the same way as load

The government confirmed recently that storage would be redefined as “generation” so it can avoid double charges within the system for the export and import parts of its cycle. I ask whether that was the wrong choice. Phelan says storage is, “not generation at all”. He says it should have its own category, but failing that, “I think you would go towards the load side, because it behaves the same way as load; in industry what we are using is storage capability of industrial load, and a battery is the same thing”.
I suggest that defining it as load would help diffuse the focus on generation. Phelan says: “It would help the discussion to realise it is different thing. It definitely is a thought-provoking opportunity missed because they would have to think about exactly what it does.”

First published in the August 2017 issue of New Power Report