The energy market is becoming more complex, with uncertainty the new norm. The sheer amount of change occurring in the sector means there is a real need to understand how new ancillary services, market challenges or even changes that only seem to directly impact certain technologies will impact revenue streams for different projects in the future.

To address this, LCP have partnered with Frontier Economics to launch the GB Power Investment Index.

The Index, delivered through an interactive website, allows investors to visualise how different existing and new technologies are forecast to perform in the future, as well as providing investors with a summary of the key changes impacting the energy market and asset profitability.

LCP and Frontier Economics will also deliver a quarterly webinar series entitled ‘Investing in the GB Power Market’, which will drill into key market updates and policy changes that investors need to be aware of, and explain what the implications of those changes are.

When looking at the risks coming from the energy sector there are several areas that should be at the front of investors’ minds.

The deployment of new large infrastructure projects such as nuclear, interconnectors and offshore wind will have dramatic impacts on the power market due to both the scale of the projects and the fact that these projects will have support mechanisms in place that will impact the rest of the market. Although the general direction of some of the bigger changes to policy is understood at a high level, such as reforms to network charging, evolution of the Capacity Market (CM) and the future design of carbon pricing mechanisms, the impact these will have on individual assets is still unclear. Combined with uncertain timing, this has the potential to create both upside and downside for different investors.

In the medium term, far reaching change could come about if policies to take us towards net zero in other parts of the economy take off. Public support (perhaps as part of a post-Covid stimulus) to areas such as clean hydrogen production, electric vehicles and decarbonised heat could have fundamental impacts on demand for electricity.

Technology evolution will also continue to shape the power market with cost reductions still expected for a number of technologies.  Investors will need to think carefully about the impacts of such reductions.  They could spark an increase in demand but could also see governments starting to wean technologies off support, or result in cannibalisation of prices in shallower markets due to rapid entry of new capacities.

A recent example: the impact of changes to the negative pricing rule for CfDs are already being realised by developers and investors.

Renewables have support schemes in place to incentivise investment in these technologies to meet our carbon commitments.

If a wind farm receives £50/MWh through a support scheme, for every MWh of power it produces it can still sell its power at -£49/MWh because it would still make a £1/MWh profit on the electricity it produced. We saw this happening in May when GB experienced the longest period of negative pricing, a 17 consecutive hour period of negative pricing on 23 May  followed by an 11 hour period on 24 May.

This is significant because although old renewable support mechanisms don’t have any rules around negative pricing, newer contracts do. CfD, AR2 and AR3 get no support payments when prices are negative for six hours or more, while AR4 will receive no support payments whenever prices are negative. Merchant projects are exposed to all variations in price, making them the most risky projects.

The captured prices for offshore wind under different contract structures can be seen below.

While a CfD was once considered an almost entirely de-risked investment, you can now see that this relatively small change to the negative price rule is bringing risk into the CfD. With the amount of negative pricing hours forecast to increase in the future, developers and investors will need to factor this into both bidding strategies and asset values. 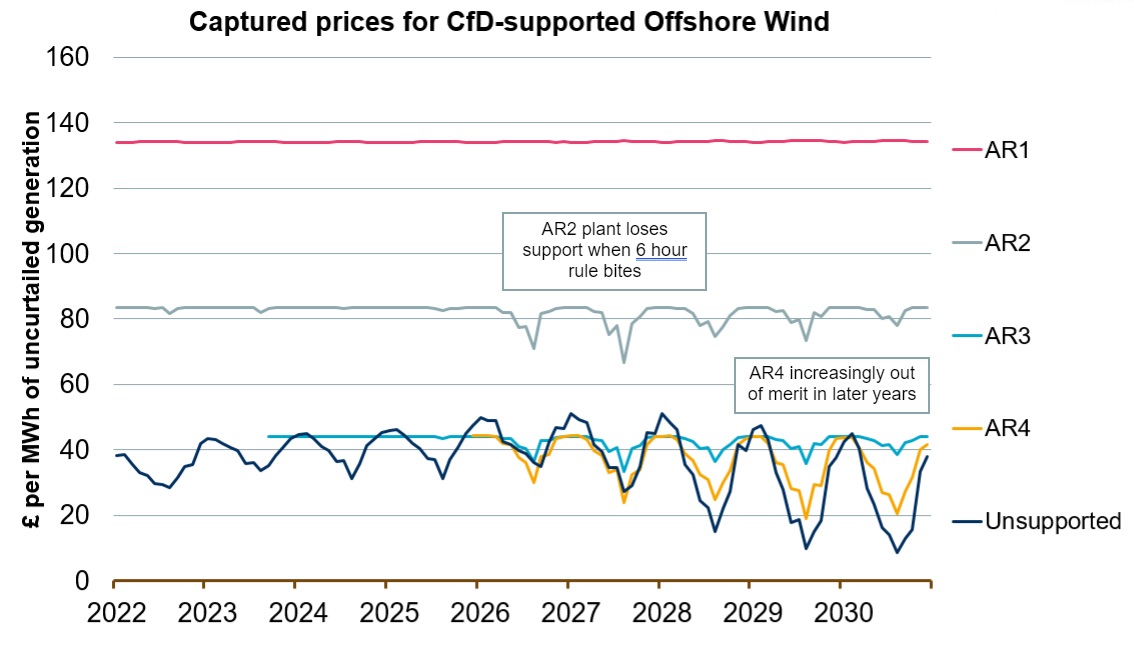 Staying ahead with the GB Power Investment Index

This change in the CfD rules will not just impact the assets bidding for and receiving these contracts, but will have a fundamental change on the number of negative price hours seen, and as such will impact every technology. It is increasingly common that seemingly small changes to policy and regulation have far reaching impacts that must be considered by investors across asset classes.

The Power Investment Index summarises the impacts of policy changes, commodity prices, ancillary services, market behaviour and a number of other factors into simple charts with commentary.

This will help users track and understand the value and profitability of the existing fleet under different scenarios, as well as assess the profitability of new technologies being deployed. The models underpinning the data shown are the same models used by the UK government as their primary energy market forecasting tools for long term policy impact analysis.