SSE Thermal and Equinor have submitted an application for development consent for Keadby 3, which they say could become the UK’s first power station equipped with carbon capture and storage (CCS) technology. The project would be in operation by the mid-2020s.
Keadby 3 will be a 910MW combined cycle gas-fired power plant, but will include a carbon capture plant and is planned to be connected to shared infrastructure being developed through the Zero Carbon Humber partnership, which will allow it to transport the captured CO2 and store it offshore.
That requires carbon capture equipment to be installed alongside the power plant that includes a CO2 absorption column and associated stack(s), a CO2 removal column (stripper/ regenerator) and ancillary equipment including chemical storage for the solvent that will remove the CO2 from the gas stream. The solvent to be used is the subject of ongoing technical studies but is assumed to be a solution of amines which have alkaline properties to which selectively absorb acidic gases such as CO2.
The captured CO2 will be conditioned to remove traces of oxygen and compressed before export to the ZCH Partnership CO2 pipeline.
The CCGT and post- combustion carbon capture and compression plant cover approximately 14ha in the north (referred to as the ‘Main Site’ in the PEI Report). According to the preliminary site layout the footprint of the carbon capture and processing facilities will be larger than that of the main CCGT buildings (see below).
National Infrastructure Planning has until 29 June to decide whether to accept the project for examination. 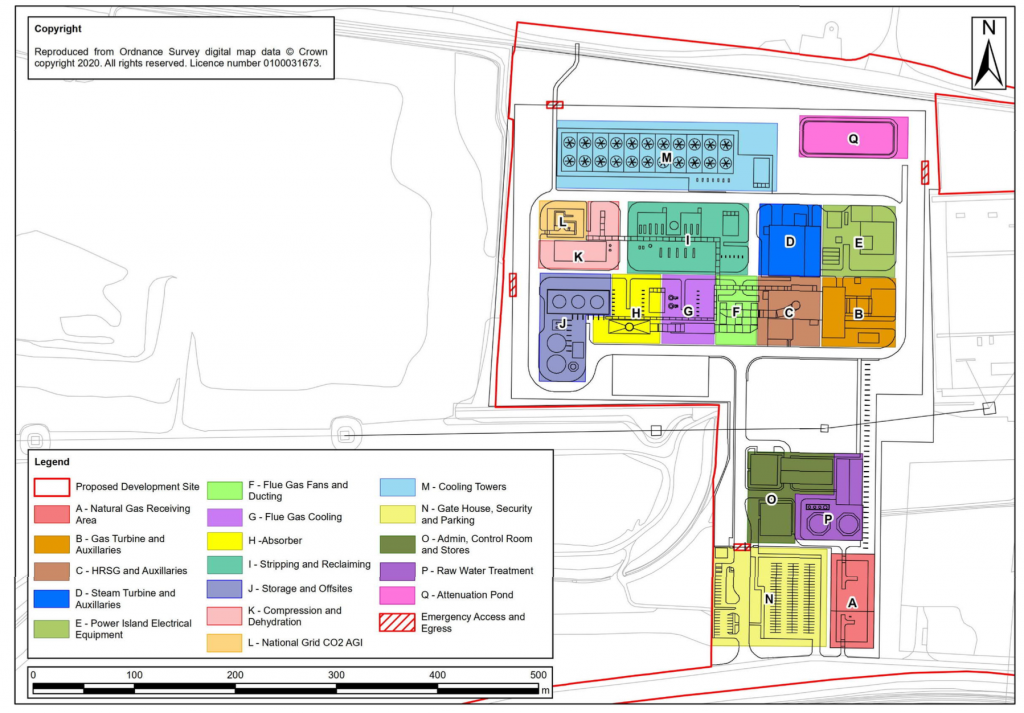