SPEN is adding electrical circuits to an existing substation close to this year’s COP26 venues in Glasgow. Next year the new equipment will become part of a new substation, one of three added or upgraded that will be required to allow for new low carbon technologies, including ambitious electric vehicle fleets. 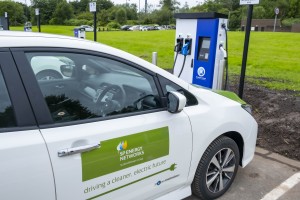 A second new substation will be critical to First Bus’s plans to phase in electric buses from 2021 to 2023 with the necessary charging infrastructure. This work requires additional capacity that currently cannot be supported by the existing electricity network. The new primary substation will be on land provided by First Bus near its Caledonia Depot in the south side of the city and will be completed by the end of 2022.

The third project willbe a £1 million investment to upgrade equipment in 16 substations in and around the city to support the planned decarbonisation of Police Scotland’s vehicle fleet. The fleet, made up of around 3,500 marked and unmarked vehicles, is the largest public sector vehicle fleet in Scotland and the second largest police fleet in the UK behind the Metropolitan Police. This reinforcement work will release additional network capacity, allowing Police Scotland to connect electric vehicle chargers in key locations as it accelerates plans to decarbonise its entire fleet.

The network project will assist in the creation of a ‘green corridor’ of electric vehicle charging points along key routes which this year will be primarily used by police to escort delegates and heads of state when COP26 takes place in Glasgow.
Frank Mitchell, chief executive of SP Energy Networks, said: “Glasgow is about to host one of the most important climate summits since 2016, COP26. The summit will be a pivotal moment when global action is agreed to help tackle the ongoing climate crisis.

“Here in Glasgow, and across the UK, we are also at a pivotal moment for our energy networks. We need to see significant investment in our networks now, so they can deliver the electrification of heat and transport and the move to renewable energy that is needed to meet our climate ambitions.

“This £13 million funding will not only enable the delivery of COP26 later this year, but it will play a part in Glasgow achieving its own climate change ambitions at the pace and scale needed to support the city’s people and businesses on the journey to Net Zero.”