This week Ripple’s chief executive Sarah Merrick became the Business Green Leaders Award ‘Entrepreneur of the Year’. In April 2019 she spoke to Janet Wood about how to give consumers a small stake in a large wind farm. Will a stake in a project give them an interest in managing their energy effectively? First published in New Power Report, April 2019 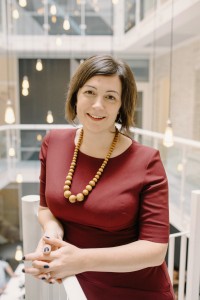 It’s not often when I do interviews for New Power that we end by talking about wedding lists, but that’s where we finish up when I meet Sarah Merrick to hear about her new renewable energy joint ownership platform, Ripple.

At first in our discussion I am prepared for a very different set of questions, about trading power, balancing and so-on, but I quickly learn that in Ripple’s proposition those do not apply – at least, it’s not something that has to concerns the project customers.

Instead, there is a pass-through. Ripple members take a stake in a specific renewable energy asset – usually a wind farm – and the part of their power bill that would be from the wholesale energy cost is replaced by power from their stake in the wind farm, which incurs just the operation and maintenance costs. If the customer switches supplier, that arrangement is ‘ported’ over.

The overall bill should be a bit lower, and the customer can see where that part of their power is generated.

That’s a relatively simple proposition for the consumer. But to realise it, Ripple has to manage contracts and data between a host of different industry players. It’s “a clean energy ownership platform”, says Merrick, “We don’t develop our own projects, we’re not a supplier and we don’t build them ourselves”. it is the type of proposition that would not be possible without modern data and system management options.

She talks me through the customer process. The first question is about the customer’s usage. With information on that, Ripple will estimate how much of the wind farm in question the customer needs to meet their annual needs. So the customer might own 1,200W of a 3.5MW wind farm.

With all the owners in place, Ripple then negotiates a power purchase agreement (PPA), so the supplier is able to pass that through instead of passing through the cost from the wholesale price.” It’s more about the saving against the bill rather than fixing prices. It’s the difference between the operating cost of the wind farm and a wholesale price – that’s where customers get their saving,” says Merrick. If the owners had put their money in an investment fund town the wind farm they wold get a return in dividends. Instead, they get a return through a lower electricity bill.

Ripple will have to manage “a very dynamic PPA”, Merrick admits. In order for a supplier to be one of Ripple’s supply partners it has to agree to be an offtaker for the wind farm and to accommodate changes in the PPA if customers move from one supplier to another.

I suggest that a proliferation of contracts adds costs, but Merrick says, “We’re trying to base everything on standard contracts – or as standard as they can possibly be. For the customer it’s as standard a supply tariff as possible, albeit with a discount.” She is requiring suppliers to pass on the saving, but not defining how that is done. “They may do it on a yearly basis or a half hourly basis, but it has to be auditable. We sit in the middle and make sure that our customers get best value from their wind farm”.

Merrick says for “people that come to this from an investor perspective, all they want to know is what the customer’s rate of return is. But all of our research suggests that for the customer that is absolutely not the biggest driver.” It is the link to the project that is attractive.

Eventually Merrick thinks this will lead to behaviour change and more efficiency for those who want to be more active energy consumers.

In the longer term, Ripple will have an app that compares generation with use, “so users will have a personal energy balance in real-time. That will then drive behaviour. When people put solar on the roof they become real energy enthusiasts and they want to be using as much of their electricity from their solar panels as possible. We want to get that effect, but , for example, on a really low cost wind farm in Scotland,“ says Merrick. To make that easy she says that “over time what we hope will happen is that people will start to enable their smart meters and smart appliances to do smart things and you can then get the demand portfolio starting to balance the output of the wind farm”. She is not hoping for exact matching “but if you can get any correlation you get better balancing and get better value from the balancing markets”.

There are other opportunities. When wholesale market prices are high, customers could potentially “switch everything off and sell that value into the market. That won’t happen straight away but in terms of where the model can get to for customers, that’s potentially a destination,” says Merrick.

That may involve partnering with demand-side management providers or it may be that Ripple’s supplier partners offer that to their customers.

How far has the project got? The company is raising investment for its platform first. “Once the investment is concluded, we estimate it will be three or four months before we can launch our first project. That will be the public launch when we say to people we’ve got this wind farm come and take a stake in it,” say Merrick.

The platform needs approximately £1 million. An angel investor has provided “a bit of it”, says Merrick. “We are going to be doing a crowdfunding in the next few weeks and that’s really exciting. We want people in the industry to be able to own it.”

Ripple has its first wind farm in mind and three or four back-ups, depending on the launch timing. Wind farms have an economy of scale, so “if we owned 20% of a 100MW project we would have a lower cost of energy than if we had a 20MW project. We are looking at both options but the model works equally well with either.”

Ownership of the wind farm will be in the form of a community benefit society, where shares will be withdrawable but not transferable. “That’s part of what we will manage, so if someone buys an electric vehicle and they need another 2MWh a year they can request more of the wind farm. If someone moves and doesn’t need any more electricity in the UK any more they can withdraw their shares and we can transfer them.

“But they can’t be traded – part of the value of the platform is to manage the CBS.”

There will be a dedicated CBS for each wind farm, rather than having a share in a portfolio of wind farms. Merrick says this is “because we want people to feel really close to their wind farm, and owning a tiny proportion of a lot of wind farms doesn’t give you that same engagement”. It means the customers are taking on the risk of a poor-performing wind farm – this is a capital investment and it does carry risk.

Merrick says:“There will be variations in the costs but we think not dramatic. The wind farms will be probably more insured and more protected then maybe a utility would see as necessary. But it’s an investment that people will have to understand there are risks around it.”

Ripple will be looking for about 800 customers for its pilot project. “We are looking for early adopters in the energy space – maybe they have an EV or are looking to buy one, maybe they have solar but it doesn’t cover the whole demand,” she says. Many more would be needed for a 20MW project. Ripple would be taking the same role in the early project stages as a pension fund manager or other investor would do, checking contracts and keeping construction on track.

What’s been the response of suppliers? Merrick says some “see it as a new generation of green tariffs. You have a clear link to the wind farm and you have stability of a bit of your electricity bill.”

Customers have to be able to switch supplier, but “in a crowded market it’s a good differentiator”. It is very unlikely to have more than 10 suppliers with Ripple tariffs – probably non-Big Six companies, because “we are looking at people who have switched already and are confident consumers. It’s more likely that people who are with a one of the non-big six suppliers are that sort of customer.”

That’s an upfront cost that could be hard to swallow for those without plenty of disposable income. But that’s when we start to talk about ways to spread that cost.

One might be as an employee benefit. “Instead of paying that [£1,100) in one go, they could do it like a bike to work scheme where the employer pays it and the customer has £100 a month for a year taken out of their salary,” Merrick says.

“It’s about making it really, really accessible for as many different people of different income levels as possible. We don’t want this to be the preserve of the wealthy who have access to cash, we wanted to be widely available,” she adds.

Merrick is also looking at timings and payment by instalments. “When you build a wind farm you don’t have to pay for all the wind turbine upfront… We want this to be as accessible for as many people as possible so we are looking to see if we could use some form of instalment basis.”

By now we are discussing all kinds of employee benefit schemes, like the ‘share save’ that enables employees to take a stake in the company via salary sacrifice.

Merrick links that to another employer-based option via Corporate PPAs. These are becoming quite interesting to energy markets, but she has a vision that employees as well as the company will be able to point to their renewable energy investment, offered as a company benefit. “It’s a way for big corporate or any company to boost the impact they get from their corporate PPA by enabling their employees to be able to sign up.”

And personal investment? That’s where I think the Ripple model has a definite chance of cracking a new market. Merrick notes that it is a way for local communities to be offered a stake in wind farms being built within view. Personally, I’d be delighted if wedding or housewarming lists had a wind farm fund option..

← Two more company failures: over 5% of domestic customers in SOLR since the start of September
The green transition is a ‘golden opportunity’ and firms and investors will benefit from taking fast action, says ECB →