Gresham House Energy Storage Fund (GRID) is aiming to exceed 1.5GW of operational storage in the UK and the Republic of Ireland by the end of 2024 and is moving towards longer duration storage of up to two hours, which it expects to become “at least as profitable as for shorter duration sites”.
The shift in emphasis came in a trading update to 31 December for the battery storage provider, which described the year as a “transformational” for the company.
The company has 415MW of battery storage under construction, up from 175MW in the preceeding quarter, and has added 280MW added to its pipeline. In 2021 it raised £100 million in equity funds and £180 million of debt (at an interest rate of SONIA + 300bp before hedging costs).
It said it already has several projects with 1.5hr duration and most of its pipeline projects can be built with “at least 2-hour durations”. All-in costs are expected to be, on average, under £450k per MW for 1 hour projects and under £625k per MW for 2-hour projects.
At least two projects, for delivery later in 2022 and 2023, will be built to 2 hour durations, “as the trading opportunity for 2-hour duration sites becomes at least as profitable as for shorter duration sites”. The company said, “This opportunity is becoming more compelling as the frequency response market (which only requires sub-1 hour projects) is now becoming saturated, as widely anticipated.”
John Leggate, chair of Gresham House Energy Storage Fund, said the outlook remains very exciting for energy storage sector investments, noting that the Contract for Difference (CfD) auction launch is expected to result in a further 12GW in contracts, primarily for offshore wind. He said, “This substantial growth in renewables will lead to increased generation intermittency and therefore drive the need for significant additional energy storage capacity. GRID remains committed to taking the lead in providing this storage capability in the UK and Ireland.”
The company said Covid-related supply chain challenges have not had a significant effect on budgets, but have pushed some project timelines back by up to a quarter.
See the full list of projects below. 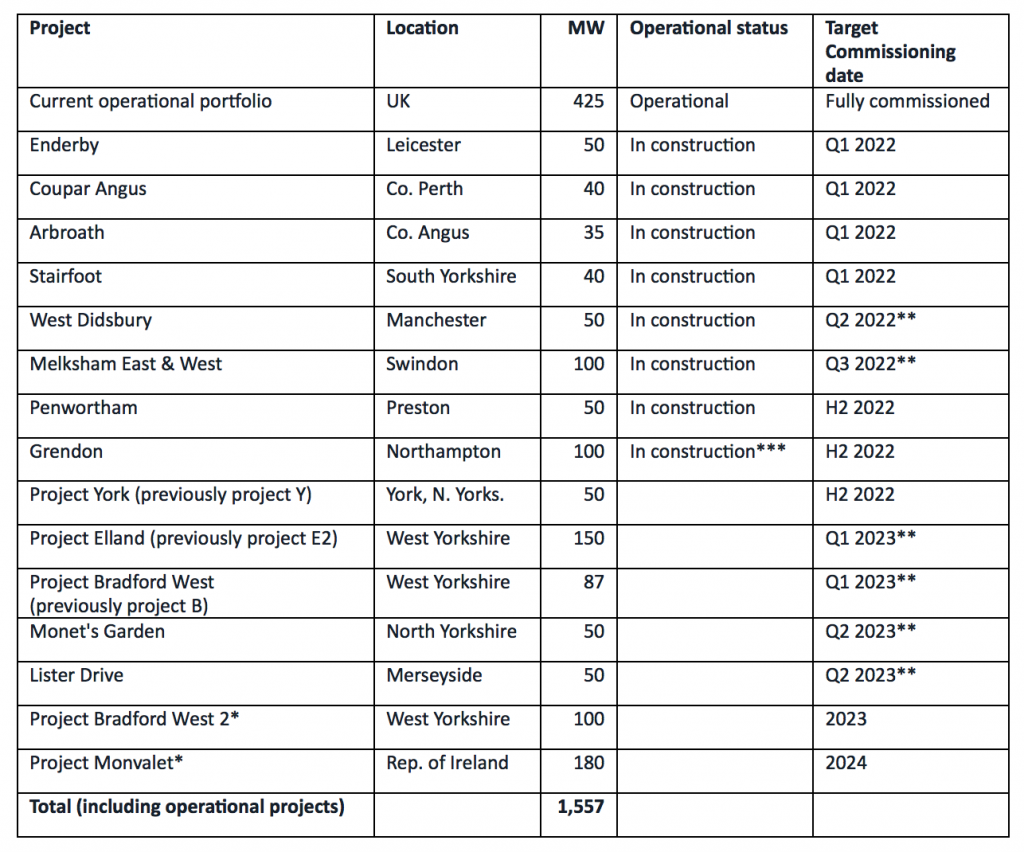