From the archive: Origami chief executive Peter Bance on why the energy industry must think short-term and asset-light

Having data and control over energy assets is better than ownership, says Origami Energy chief executive Peter Bance, because you can chase value. He told Janet Wood why the industry must think more short-term and asset-light – and why distribution system operators may face a different landscape by the time they enter ED2

Origami Energy is the technology provider for two network innovation projects (see below).

Chief executive Peter Bance says the coming year will see greater volatility and more stresses at the extremes of the electricity system this year. But “value pools” are evolving, so distributed energy resources will have to be more responsive to value opportunities as they arise.

I ask whether it is the technology or changes in the market that are driving industry change. He says: “Whether it is due to good luck or judgement, technology and new market arrangements and regulation are working together.” 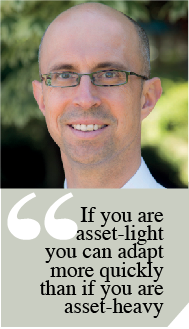 He says control technologies will be critical to unlock additional value, manage assets in real time, and remotely optimise them as market signals change. That could not have happened in previous decades, but “new higher-power technology is real time and powerful”.

It is also a necessary response to the changing energy generation portfolio, with more variable renewables on the system and more local generation. There is “more granularity and shifting value pools and that needs more a powerful machine to optimise it”.

Talking about how investment in energy is changing, he says: “A company with a big financial investment in infrastructure will be in trouble. Companies now need to be nimble and dynamic. It’s a big culture change for lots of incumbent businesses. They are locked into long-term thinking because they have the asset experience.” That means planning and building for decades ahead. “If you are asset light you can adapt more quickly than if you are asset heavy, because you can dynamically adjust.”

Applying the phrase “asset light” to energy reminds me of the Enron debacle, when the collapse of that company and its “trades-only” business model meant the industry scrambled to back its businesses with real assets. What’s different now?

“This is not financial engineering,” says Bance. Companies may not have physical assets, but with more control and the ability to manage orders of magnitude more data, “there is an underlying physical reason” behind the financial transactions.

“If you have a contractual right to use it, large demand can go up and down using intelligent controls and data. You have the commercial and technological ability to understand a world of physical assets. Understanding the circumstances means you can trade with better data.”

He says: “It’s the difference between having full data and working blind.”

Self-organisation will hollow out DSOs

Bance says there is an emerging opportunity for industrial microgrids – or community energy schemes – to offer localised services on a commercial basis, particularly in grid hot-spots. The ability to match supply and demand in real-time will be a key enabler.

He points out that generation is simultaneously moving to a more globalised world, with more interconnectors, and a more local one, and you have to “control optimally between different value pools”.

In 2017 distribution network operators (DNOs) began procuring constraint management services for the first time. Ensuring that the system operation requirements of the transmission and distribution networks do not clash has been a concern for the industry. But Bance says that is an artificially narrow view of localised services and the difference may not be so clear in future. Selling services to distribution networks, “may not be the dominant way”. “Some actors, like community energy projects or industrial microgrids, can sell at any point in the hierarchy – up to the grid supply point and beyond. How local is local?”

Bance says that localised sources will not necessarily be trading with any system operators. “They [DNOs] have an important part to play, but price signals may be what commercial businesses will organise around – not through DNOs. Infrastructure is important. But there may be a direct relationship between commercial actors, if they have generation and demand and they can self-organise.”

The start of the next price control period – dubbed ED2 – in four years is a key point in the DNOs’ transition to DSOs. Given what Bance suggests about energy groups “self-organising”, I ask whether DNOs should plan for a future in which they have direct access to a much smaller proportion of the system and its actors.

He says that is “entirely possible”. “They may complete the [DNO-to-DSO] transition and get ready to pull the switch, but in the meantime commercial companies will self-organise. [DSOs] might find transactions going fast and furious between other organisations.

“There is no certainty that the DNO-to-DSO transition will become a one-stop shop for services. Local actors may get together faster. In the next price control, DSOs will be in competition with others. It could be that the majority of localised services are outside the DSO.

“That could easily happen by ED2.”

Four years is a long time for companies, he says, because the don’t tend to think in the timescales that apply to building networks. And awarding contracts “is massively quicker than building infrastructure”.

When it comes to the physical assets behind new contracts, it is storage that Bance has highlighted.

For that, he says, “I expect wholesale market access to be a critical part of the evolving business case”. But he says flexible control is key. ”There may be some niches where even a dumb battery can pay its own way. But what will dominate will be assets and business models that are dynamic.”

I suggest that need for flexibility presents a problem for investors making technology decisions, for example over fast response versus energy volume. Bance agrees. He thinks companies “will end up using the same technological approach”, and that will drive them towards general-purpose storage. But “lots of the tailoring can be done in the electronics and the software”. Controls must evolve and adapt, he says, “then people can reconfigure the physical solutions”.

He says companies will have to be BSC parties. “Providing one narrow service like an ancillary is unlikely to justify a battery. You need another critical value pool that you can trust for years and we think that is the wholesale market. Access is vital.”

When it comes to providing ancillary services, he is watching National Grid’s System Needs and Product Simplification (Snaps) evolution. “It will rationalise and simplify the market – it is unlikely to make it any easier to win ancillary market tenders,” he says.

Of the SO’s newest Snaps update, he says: “It is directionally helpful with messaging.” But some near-term changes were “relabelling”.

He is pleased with the move towards real-time solutions and says those who call for long-term contracts because they are more bankable “will have to get used to it”. “The direction of travel is more dynamic and liquid.”

That’s because there is a broader risk in long-term contracts: “Locking in stuff may be a more bankable solution, but that may not be the right solution. It might lock in the wrong one for the long term. Shorter duration is the right direction.”

He would like National Grid to move to day-ahead markets for its products as soon as possible.

But although simplification is good, the ability to switch between services is as important. That means greater compatibility between products in all the markets – ancillary services, system balancing and wholesale. “Now it looks different, but it should begin to converge,” he says, with similar contract structures and periods. That will enable providers to be nimble and “it’s more efficient for the system”.

I ask whether this risky, dynamic market needs new participants that can manage it for participants whose business is not energy. He says: “An entire new segment of the market will evolve to help manage the risk.” Those companies will need “some combination of risk management, financial pedigree and financial understanding”.

It’s a very different industry with very different actors who access assets in different ways. That’s a good thing, he says. Up until this decade, the energy industry thought it had been evolving since deregulation, but that was not the case, I suggest. Bance says: “The old industry was rearranging the deckchairs.” Now new entrants to the energy sector will drive change faster and further.

This interview originally appeared in the February 2018 issue of New Power magazine. Not yet a subscriber? Email [email protected] to find out more.