Scottish and Southern Electricity Networks (SSEN) Distribution has enabled faster and cheaper installation of a 70MW solar farm at the former RAF Lyneham base in Wiltshire by using a technology that enabled it to connect directly to an existing tower.
Initially it appeared that the solar farm, located next to an ancient woodland, would require installation of a new tower, diversion of an overhead line and removal of part of the woodland – making it much more costly and slow to install. Instead, SSEN-D asked Freedom Professional Services to install a POC-MAST system on the site. The installation took just ten days, with no disruption to power supplies for those living and working nearby.Each of the two POC-MASTs required were lifted into place in just six minutes.
Originally developed for a renewable energy project where a traditional connection into an electricity network was not possible the POC-MAST since had substantial investment and testing. The company says that because it takes less than 5 months from concept to construction, compared with 6-12 months for a traditional installations it can make the difference to whether a scheme is viable or not. Since the first installation, 33kV and 132kV POC-MASTs have been installed at other locations including a data centre in the South East.
The 213-acre solar farm is the first to be developed with the Ministry of Defence.
Craig Gilroy, head of connections for SSEN said: “I’m delighted that SSEN has been able to use this system at the RAF Lyneham site, providing us with a flexible and quick solution to enable the connection of this substantial solar farm. This innovative solution provides greater flexibility for renewable generators to connect to the network in a fraction of the time needed to connect using existing solutions and helps DNOs optimise the use of their infrastructure.” 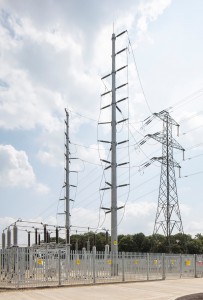 Martin Buckland, managing director at Freedom Professional Services, said: “We developed POC-MAST to offer an easier, quicker and more cost-effective option for energy projects to get connected to the network, so it’s pleasing to see our innovative product offering these benefits to SSEN as a distribution network operator, with minimum disruption to their network.”